The topic of this post is about Bluetooth and how we can use it in our applications.

Bluetooth technology can be used in a variety of ways, and in this post I am going to focus on how we can make our device broadcast its presence to nearby devices, and also how we can scan for nearby devices that are running our app.

In order to implement this app, we are going to use Core Bluetooth, a framework to communicate between BLE devices provided by Apple.

Long story short, in this article, I am going to create a simple app to demonstrate how to use Core Bluetooth to implement the above mentioned scenario. The app will consists of a UITextField, where the user will enter the name for the device and two instances of UIButton. The one button will act as a trigger to start broadcasting, while the other will start the process of scanning other nearby devices. 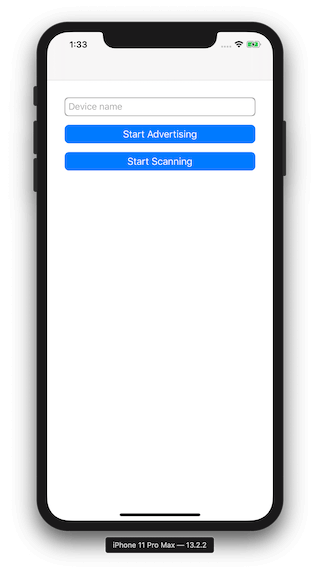 With separation of concerns in mind, we are going to create a class that will handle the logic of broadcasting and scanning for devices using CoreBluetooth, and then we will see how we can use this class in a Catalyst application.

Before we jump to the actual implementation, let’s take some time to think about the desired behavior of this class and define the corresponding protocol.

First of all, we are going to need two functions that will be responsible for the initialization of the advertising and the scanning process. For the advertising one, we need to pass a String as a parameter, which is going to be used as the name of our device. Then, we have to somehow notify the uses of this class when a new device is discover. Maybe for this, we can use a delegate with a function that will be called once a new device is found and a hash map to store the peripherals.

Now that we have our protocol ready, we can move on to the actual implementation. Let’s create a new class named CoreBluetoothManager. This class will conform to the BluetoothManager protocol and will have the following content:

Please mind that you have to add import CoreBluetooth in the beginning of the file.

Then, we define the implementation for the func startAdvertising(with name: String) requirement. In this function, we initialize an instance of CBPeripheralManager which we will store in a private property. CBPeripheralManager is part of the CoreBluetooth framework and its primary function is to allow us to advertise to other devices.

For now the compiler will complain because we have set self as the delegate and it is not conforming to the CBPeripheralManagerDelegate protocol. We are going to fix this soon.

Moving on, we have the implementation for the startScanning requirement. In this case we initialize an instance of CBCentralManager which we also store in a private property. CBCentralManager is responsible for scanning for nearby BLE devices.

Since the compiler is complaining about the delegate, let’s try to implement them. First, let’s add an extension to the CoreBluetoothManager that will conform to the CBPeripheralManagerDelegate protocol and add the following content:

Here, we provide an implementation for the peripheralManagerDidUpdateState requirement. In the body of this function we check if the peripheral.state is .poweredOn as described on Apple’s documentation.

Before you call CBPeripheralManager methods, the peripheral manager object must be in the powered-on state, as indicated by the CBPeripheralManagerState.poweredOn. This state indicates that the device (your iPhone or iPad, for instance) supports Bluetooth low energy and that its Bluetooth is on and available for use.

For the service UUID, we add an enum named Constants, where we add a case for the SERVICE_UUID, like in the following snippet

Finally, we can call the startAdvertising function to initiate the advertising process.

Let’s move now to the scanning part of our class. We are going to add another extension to CoreBluetoothManager and this time it will conform to the CBCentralManagerDelegate protocol. The content of this extension will be the following:

In the same fashion as with the CBPeripheralManagerDelegate extension, we satisfy the centralManagerDidUpdateState requirement for the CBCentralManager this time, and again we are checking if the central.state is .poweredOn and if it is already scanning then we call the stopScan. Finally, we call scanForPeripherals and pass the CBUUID with the SERVICE_UUID that we are using for our application. This way, we are going to scan for devices that advertise this service and ignore all the others.

After starting the scanning process, we have to get informed when a device is discovered and for this reason, we add an implementation for the didDiscover requirement of the CBCentralManagerDelegate. There, we just update the peripherals dictionary with the peripheral that we have just discovered.

And that’s it regarding the BluetoothManager. Let’s now move on and see how we can use this class.

Since the post is about Core Bluetooth I will focus on how to use the class CoreBluetoothManager that we have just created and skip the UI part. The UI is created with UIKit, AutoLayout and programmatic views. Furthermore, the whole code can be found on GitHub and it’s a Catalyst application, meaning you can run it on iPhone, iPad or Mac.

To use the CoreBluetoothManager, we instantiate an instance of it in the SceneDelegate and we inject it to our only UIViewController, the BluetoothViewController.

In the BluetoothViewController, we receive an instance of a class that conforms to the protocol BluetoothManager in the init function and we store it in a private property.

As a result, we have to make BluetoothViewController conform to the protocol BluetoothManagerDelegate, by adding an extension and providing an implementation of the method peripheralsDidUpdate to fulfill BluetoothManagerDelegate’s requirement. In this function, we just print the names of the peripherals on the console, but we could potentially reload an instance of a UITableView that would present the nearby devices.

And that’s about it for the application code. But before we run the application, we have to make some further adjustments, to enable the usage of Bluetooth.

First, we have to add an entry for the key NSBluetoothAlwaysUsageDescription to our Info.plist file, like in the following snippet

Then, we have to select the target of the app, go to Signing & Capabilities > App Sandbox and enable the Bluetooth checkbox.

Lastly, make sure to enable the Bluetooth on the device that you are running the application.

Now our app is ready!! Feel free to run it and start advertising and scanning for nearby devices!

In this post, we have seen how to use the CoreBluetooth framework to advertise that an application is running on a device and also scan for nearby devices that are running the application. These concepts can be used as a base and build more complex application that will rely on Bluetooth and the communication of nearby devices, like for example a chat app, or maybe an AirDrop-like solution to share documents with other non-Apple devices.