Have you ever been into a situation where you would love to see all of your users to update to the latest version of your app?

Certain situation such as a serious crash that is fixed, the end of the support for a feature, or a breaking change on the API may make an older version of the app no longer supported, and though most of the users have the auto-update on, there is still a small but still decent percentage who has opted out.

This situation is not the ideal to be in, but there are still things you can do and it’s better to be prepared and your app to support a functionality that will “force” the users to update to the latest version available on the App Store.

Besides that, even if you don’t face this kind of issues, it’s always nice to remind your users that a new version is out, and that by downloading it, they will be able to enjoy all the latest features, bug fixes, better performance or whatever change may have happened in the latest version.

So, long story short, in this post, we are going see how we can implement such a solution by fetching from iTunes some information about the latest version of the app and then use it to decide whether we should force or suggest our users to update the version of the app they are using.

First thing first, we have to decide on the strategy we are going to follow.

Furthermore, in both scenarios we are going to show the alert if and only if the version is released 7 days ago or more, to cater for phased roll-out and also give ourselves some time to identify if there is any potential issues with the latest release and fix them before asking all our users to update the app.

You could also wrap all this logic with some feature toggle mechanism. One such option which is also easy to integrate is Firebase Remote Config. If you are interested to learn more, you can visit my previous posts on how to set it up and how to add it on your iOS app.

Let’s start with where we can fetch the information about the latest release from iTunes. There is a URL in the format http://itunes.apple.com/lookup?bundleId={bundleId}, where {bundleId} is the Bundle Identifier of your app. The result of this URL is a file with a JSON object which amongst other contains information like the current version of the app, the date of the last release, the release notes, etc.

The following snippet contains the implementation for all these 3 models:

Then, let’s move on to the implementation of the AppUpdateManager, which will be responsible about the decision of whether we will prompt the users to update the app, and what time of update is it (required or optional). The implementation will be like the snippet below:

Firstly, we define an enumeration which represent the 3 different options regarding the update; it could be required, optional, or there is no need to update right now.

Then, we provide an initializer which is used to inject the dependency. We need to fetch the version of the running app, and instead of directly using the Bundle.main, we inject a property which conforms to the protocol BundleType. In this way, we could later provide a mock implementation and write some unit tests.

The following snippet contains the definition of BundleType as well the conformance of Bundle to it:

Going back to the AppUpdateManager class, we have the updateStatus method. In its body, we start by getting the version of the running app. Then, we fetch the app info from iTunes using the URL we mentioned before and decode the response. As we move on, we are calculating what was the day one week ago.

Last, using the release date, the version we fetched from iTunes, the day one week ago and the version of the app that’s running, we implement the logic of our strategy and return the corresponding status.

And that’s about the AppUpdateManager. Before we see how we can use it, we have to decide on how we are going to present this information to the user. For this reason, we are going to need two extensions.

The first one will be responsible for opening the AppStore page for the app so that the users can update the app. We are going to add it as an extension to UIApplication and its implementation is in the following snippet:

The second one, will be responsible of creating a UIAlertController based on the value returned from the updateStatus method. For this reason, we are going to provide a convenience initializer to the UIAlertController and in the snippet below you can find the implementation:

Now, with everything set up, we can move to one UIViewController and add the following snippet, to present the alert if an update is available on AppStore:

All these snippets as well as the implementation of some unit tests can be found on GitHub in this gist.

The outcome of this implementation will look like the following screenshots depending on the AppStore’s and your app’s version: 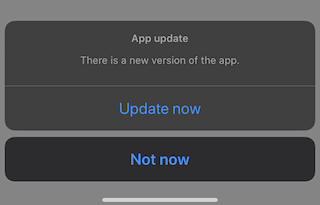 Of course, in your app you could use a different UI component to present the information and maybe follow a different strategy and define your own set of rules on whether the app should present the update prompt or not.

FYI, there is an open-source project named Siren which you could alternatively use.

As a side note, it seems that Android already offers a solution for in-app-updates, so hopefully, I can see it coming on iOS soon, and then we will not have to force the users to open AppStore to make the update.

And that’s about it! In this post, we have seen how we can notify the users of an iOS app when a new update is available on the AppStore. First we have seen why it important to act proactively and support such a feature so that it is available by the time we need it and then we have walked through the steps needed to develop such a solution.

I hope that by adding this feature in your app more and more users will move to the latest version.